Breakup word is a painful word. If they break up each other then make an injury in their mind. It can be in case a boy or a girl. Although have you see the laugh on his face but many pains have hidden in his mind.

Have you think ever most lovers do after a breakup. So, What exactly changes after a breakup? I write this article to know you about this matter what can exactly to do after breakup a boy or girl.

What changing you can see of their behavior here I mention some changing after a breakup within boy/girl? 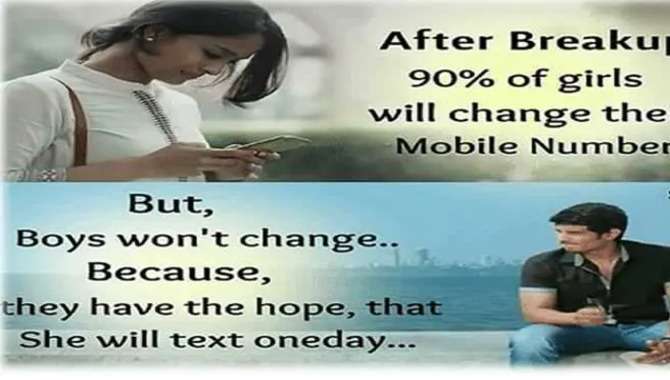 1. Some People think a breakup means one kind of problem. After break up with his lover he thinks that all pain has been cleared now such as girlfriend pain, time to time message reply, morning time says good morning, etc.

When anyone gets a breakup to feel free now from the entire problem. After the breakup, he also gets hurt by his girlfriend. In finally he wants to lead his life newly and try better something.

2. After the breakup you will understand the importance of your friends. Always you avoid them for your girlfriend. If will understand how to neglected them for a long day but they didn’t forget you rather you forgot them.

If you share your breakup pain they always help you. In case, your friendship will be deep like before time. 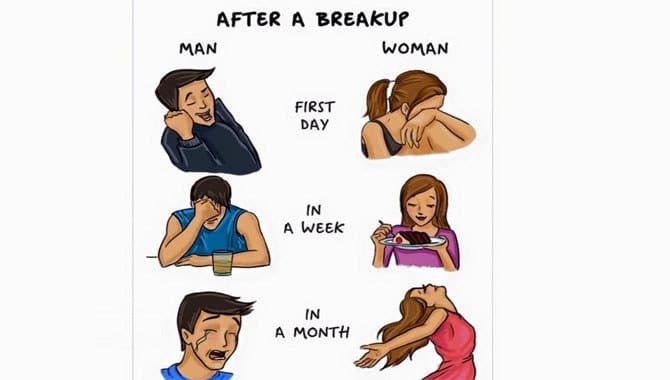 3. You won’t give these questions answer like where are you “Sona/Babu” what do you do now, whom with you? When you come back and when will you go with me and many more questions.

Now turn off your giving answer to this type of question. The turn to answer all these questions will end after the breakup. You will get rid of the word lover in simple words.

4. From now on you will avoid outside food. Because where you stood on the side of the road and ate something with your boyfriend, at least your mind will not allow you to eat something again.

5. From now on you will see your favorite movie. For so long, you may have had to sit and swallow the extremely intimate picture on the face of your lover. But after the breakup, there was no one left to convince you.

6.  Lover’s phone bill, restaurant chicken Tandoori bill, high-heels, the price of the dress has been in your pocket for so long. After the breakup, it is time to leave half alive. Now either pay attention to yourself.

7. He kept his eyes closed for fear of his lover even if he went to look at another girl. Who else gets you after the breakup? Now freeze and brush. Like and comment on another girl’s profile on Facebook. There is no one who will take apologizes to you.

8. From time to time there was no problem with the phone. Just like you have to read this kind of message like ‘Sona I love you’, ‘Sona do you miss me’, you don’t have to reply to this message anymore.

Finish woke up night after night to talk. Because you will get the time and an adequate amount of sleep.

9. So far, in the wrath of strange love, you bought your favorite storybooks and left them. Under the pressure of love, only dust has fallen on him so far. There is no someone to take pull behind you. Take the books off the shelf and start reading one by one.

10. After the breakup but you find another meaning to the sad song. And with this opportunity, new songs can be added to your mobile or iPad. And it can be said that even if one or two Kali poems come out of your pen after getting inspiration from this song.

11. Alcohol reduces pain. It is from this idea that he drinks alcohol at least once after a breakup.

12. Rely on social media at this time. Even after the break-up, keep a secret eye on how happy your partner is, or whether he has a girlfriend/boyfriend again.

13. Awaken your own poetic character. Although, he/she can’t write poetry but try to write 2 or 4 lines part of poetry.

14. He expresses himself in front of social media and friends in such a way that he is free.

15. After suppressing as much anger on the ex-boyfriend, condemn the friend. But think of nothing else though in mind.

16. Tinder or Facebook to hang out with someone new and try to think about him. But if you go from one break-up to another, that relationship doesn’t last. Because this new relationship is just for refuge. This relationship will end in a certain period when will ends shelter.

Already you have known what exactly changing after the breakup. I mentioned to her some important changes and how being changing within a boyfriend/girlfriend.

Besides, you will see much more changing within a boy/girl. These changes are a common matter when someone breaks up with an ex. I hope now you know what exactly changing after a breakup.